From Wikipedia, the free encyclopedia

Rosetta is a robotic space probe built and launched by the European Space Agency to perform a detailed study of comet 67P/Churyumov–Gerasimenko.[4][5] On 6 August 2014 it entered into the orbit of 67P/Churyumov–Gerasimenko and became the first manmade spacecraft to orbit a comet.[6] It is part of the ESA Horizon 2000 cornerstone missions and is the first mission designed to both orbit and land on acomet.[7]

Rosetta was launched in March 2004 on an Ariane 5 rocket and was scheduled to reach the comet in August 2014.[8] The spacecraft consists of two main elements: the Rosetta space probe orbiter, which features 12 instruments, and the Philae robotic lander, with an additional nine instruments.[9] The Rosettamission will orbit 67P for 17 months and is designed to complete the most detailed study of a comet ever attempted. The mission is controlled from the European Space Operations Centre (ESOC), in Darmstadt, Germany.[10]

The probe is named after the Rosetta Stone, a basalt slab of Egyptian origin featuring a decree in three scripts. The lander is named after the Nile island Philae, where an obelisk was discovered with inscriptions. A comparison of the hieroglyphs on the Rosetta Stone and the obelisk led to greater understanding of the Egyptian writing system. Similarly, it is hoped that these spacecraft will result in better understanding of comets and the early Solar System.[11][12]

The spacecraft has already performed two successful asteroid flyby missions on its way to the comet.[13]In 2007, Rosetta also performed a Mars swing-by (flyby), and returned images.[14] The craft completed its fly-by of asteroid 2867 Šteins in September 2008 and of 21 Lutetia in July 2010.[15] On 20 January 2014,Rosetta was taken out of a 31-month hibernation mode and continued towards the comet.[16][17] Over the following months, a series of thruster burns slowed Rosetta relative to 67P, and Rosetta entered thruster-assisted orbit of the comet on 6 August 2014.[18]

This is the planned timeline for the Rosetta mission:

Rosetta's current location can be found on the ESA website.[19]

A 9 minute long video report by the DLR about the Rosetta mission. (Full HD; English)

During the 1986 approach of Halley's Comet, a number of international space probes were sent to explore the comet, most prominent among them being ESA's Giotto. After the probes returned valuable scientific information, it was becoming obvious that follow-ons were needed that would shed more light on the cometary composition and answer newly opened questions.

Both ESA and NASA started cooperatively developing new probes. The NASA project was the Comet Rendezvous Asteroid Flyby (CRAF) mission. The ESA project was the follow-on Comet Nucleus Sample Return (CNSR) mission. Both missions were to share the Mariner Mark II spacecraft design, thus minimising costs. In 1992, after NASA canceled CRAF due to budgetary limitations, ESA decided to develop a CRAF-style project on its own. By 1993 it was evident that the ambitious sample return mission was unfeasible with the existing ESA budget, so the mission was redesigned, with the final flight plan resembling the cancelled CRAF mission, an asteroid flyby followed by a comet rendezvous with in-situ examination, including a lander.

Rosetta was built in a clean room according to COSPAR rules, but "sterilisation [was] generally not crucial since comets are usually regarded as objects where you can find prebiotic molecules, that is, molecules that are precursors of life, but not living microorganisms",[21] according to Gerhard Schwehm,Rosetta's Project Scientist.

Trajectory of the Rosetta space probe

However, this plan was abandoned after a failure of the Ariane 5 carrier rocket during a communications satellite launch on 11 December 2002, grounding it until the cause of the failure could be determined. A new plan was formed to target the comet Churyumov–Gerasimenko, with a revised launch date of 26 February 2004 and comet rendezvous in 2014. The larger mass and the resulting increased impact velocity made modification of the landing gear necessary.[22] After two scrubbed launch attempts,Rosetta was launched on 2 March 2004 at 7:17 GMT. Aside from the changes made to launch time and target, the mission profile remains almost identical.

To achieve the required velocity to rendezvous with 67P/C-G, Rosettaused gravity assist manoeuvres to accelerate throughout the inner Solar System. The asteroid's orbit was known before Rosetta's launch, from ground-based measurements, to an accuracy of approximately 100 km (62 mi). Information gathered by the onboard cameras beginning at a distance of 24 million kilometres (15,000,000 mi) were processed at ESA's Operation Centre to refine the asteroid's position in its orbit to a few kilometres. The first flyby of Earth occurred on 4 March 2005.

On 25 February 2007, the craft was scheduled for a low-altitude bypass of Mars, to correct the trajectory after the first launch attempt in 2003 was delayed by one year. This was not without risk, as the estimated altitude of the flyover manoeuvre was a mere 250 kilometres (160 mi). During that encounter the solar panels could not be used since the craft was in the planet's shadow, where it would not receive any solar light for 15 minutes, causing a dangerous shortage of power. The craft was therefore put into standby mode, with no possibility to communicate, flying on batteries that were originally not designed for this task.[23] This Mars manoeuvre was therefore nicknamed "The Billion Euro Gamble".[24] Fortunately, the flyby was successful and the mission continued as planned.[25]

The second Earth flyby occurred on 13 November 2007.[26][27] In 2007, as it approached Earth for a fly-by, the spacecraft was briefly designated as minor planet 2007 VN84 due to it being misidentified as an asteroid.

The spacecraft performed a close flyby of asteroid 2867 Šteins on 5 September 2008. Its onboard cameras were used to fine-tune the trajectory, achieving a minimum separation of less than 800 km (500 mi). Onboard instruments measured the asteroid from 4 August to 10 September. Maximum relative speed between the two objects during the flyby was 8.6 km/s (19,000 mph; 31,000 km/h).[28] 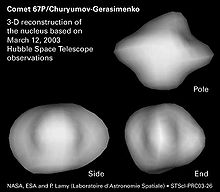 Reconstruction of the comet's shape

In August 2014, Rosetta entered a slow thruster-assisted orbit around the comet[18] and will gradually slow down in preparation for releasing a lander that will make contact with the comet itself. The exact surface layout of the comet is currently unknown and the orbiter has been built to map this before detaching the lander. It is anticipated that a suitable landing site can be found, although few specific details exist regarding the surface.[30]

The lander, named Philae, will approach Churyumov–Gerasimenko at relative speed around 1 m/s (2.2 mph; 3.6 km/h) and on contact with the surface, two harpoons will be fired into the comet to prevent the lander from bouncing off. Additional drills are used to further secure the lander on the comet.

Once attached to the comet, expected to take place in November 2014, the lander will begin its science mission:

Get 20% off your entire purchase
+ some serious inspo for your Mind, Body & Soul! Welcome to our family❤️

This sizing chart is approximate. Sizing and cut will vary between styles, please use the charts as a general guide to compare the various size scales.
If you have a specific sizing question or would like more information, please contact Customer Care. Sizes listed are US, unless otherwise noted. Get 20% off your entire purchase + some weekly inspiration to keep trusting your path! *Excludes certain products.